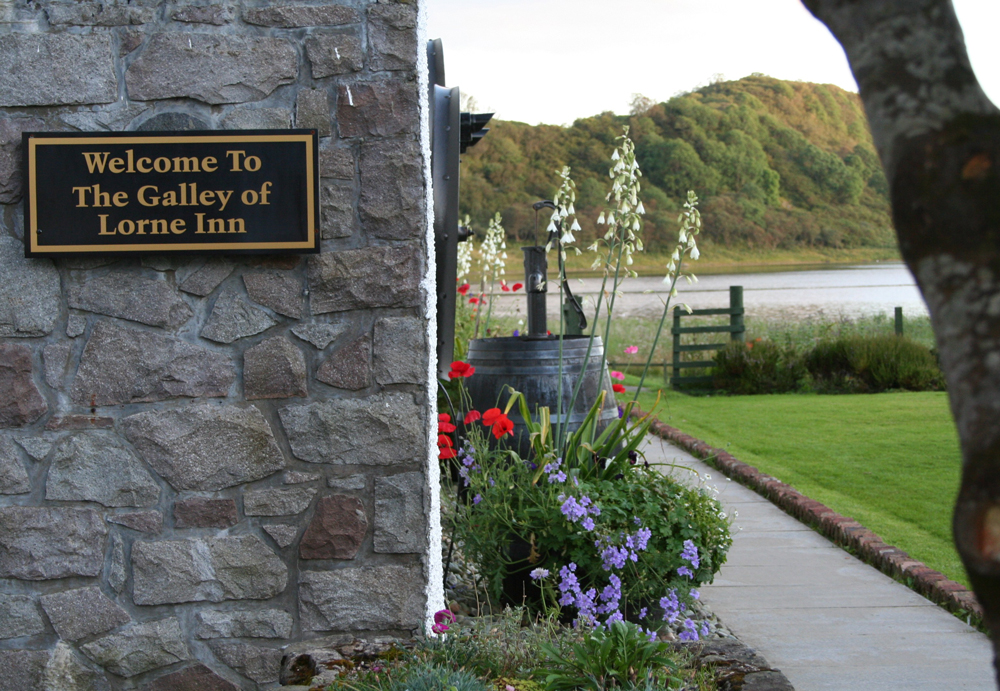 "The personal touch is first and foremost in the minds of your hosts at this family run business. Andrew and his two children Ciaran and Zoë welcome you, not just to their hotel, but to their home."

Welcome to The Galley of Lorne Inn.

Andrew, his son Ciaran and daughter Zoë welcome you to The Galley of Lorne Inn in Ardfern, not just their business, but their home too. We take great pride along with our staff to try and ensure that we deliver an experience above and beyond your expectations and as many guests do, wish to return for more. So you can get to know your hosts in advance of your arrival, please find below a potted history and background of the Stanton family and how they came to lay their hat in Ardfern.

Born in the summer of ’69, Andrew is a born and bred Coventrian. Having lived all his life in Coventry until his family’s move to Ardfern on 15th December 2006, these are the only two places he has laid down his hat.

It wasn’t until examination time in 1985 that Andrew suddenly had a change of heart and direction. Having always planned a path of A levels and University, suddenly he took an about turn and decided that the outside world was beckoning and instead chose to attempt to find gainful employment. Andrew has been fortunate in that he has only ever had to endure the stress of one interview in his life to date, that was when as a 16 year old he applied for a clerical YTS (Youth Training Scheme) placement at what was then Talbot Motor Co.

His first placement was in the accounts department at the Stoke Plant in Coventry, and it was certainly a case of being in the right place at the right time. With only a couple of months of YTS under his belt, a position became available in the Accounts Department, and having done the job already, was duly taken on full time. After a few years at the Stoke Plant, Andrew was poached by the Finance Department at the Manufacturing Plant at Ryton. This was in the day that all financial reporting for the plant was still paper based and with some investment in PC’s and through a great collaboration with his colleague, great friend and computer whizz Paul, they set about converting the Ryton Plant to a computerised reporting system. After successfully achieving this goal, Andrew then transferred to the Inventory department, to in effect achieve the same aim, to manage all of the Manufacturing Plants inventory via a computer based system.

It was not long after that, that the then called Peugeot Talbot, installed its first French Director of the Plant. Also a keen enthusiast of technology, he set about taking the plant further by creating a system that was to the second managing every aspect of a car Manufacturing Plant, a system that was called PCInfo. The Director set up a team of graduates to make his wishes come true, but it was all too soon evident that graduates in some cases lacked the actual knowledge and experience on the ground. As such the team began to change and Andrew was put in charge of creating a system called ‘Programmation’, a live Excel based networked system on which any manager or director could alter their requirements and thus change the way the plant was being run and manned in a blink of an eye. Once all systems were implemented and the Plant no longer had a need for a specialised team, it was time to turn to a new challenge.

Never in a million years did Andrew expect what was going to happen next. Whilst working for the Director of the Plant he was situated in a office next door to the then Quality Director of the Plant. After a short and succinct conversation, Andrew was then to become in charge of all UK Right Hand Drive specific suppliers for the Peugeot 206. This happened almost 4 years before launch of what was to become the most successful small car in European Car Manufacturing history. Every RHD model of 206 was built at the Ryton Plant and so Andrew apologises if anyone reading this had a problem with a 206, but given the outstanding success of this car, I think it’s safe to say that most people would have been thoroughly delighted at the time.

Whilst not the best paid or highest status position that Andrew held in his time at Peugeot, it was without doubt the most interesting, satisfying and in his opinion the most important position he ever held. Having seen the 206 as a clay model in a high security facility in France, having driven the first prototype around a test track in Northern France, and dealing with every manufacturer in the UK of RHD specific parts, meant a lot of travelling around the UK and time spent at The Sochaux and Mulhouse Plants in Alsace, France. Whilst it was probably never going to happen (and if it did would have cost Peugeot millions) in effect Andrew had the ability to stop the launch of the RHD in the UK had there been a significant safety issue brought about by a UK supplier prior to launch. However, gladly all went to plan, and the most successful small car was launched, and as they say, the rest is history.

Again there was a finite end to a position within the organisation, and yet again a case of wondering what’s next. As it happened, it became Andrew’s first foray into Management when he became Internal Communications Manager for the Ryton Plant just before his 27th birthday and became at the time, the second youngest manager in the history of the Ryton Plant. Again a most interesting and insightful angle to the world of Car Manufacturing. Access to the most classified of information and the role of representing the Ryton Plant throughout the world.

Following this role, an unexpected return was made to the Finance department which was also responsible at the time for the PC equipment throughout the plant. Having taken on this role for a few years ensuring that the PC equipment throughout the plant and the software was up to date and was of the latest technology, in addition to implementing technology on the shopfloor for team briefing sessions, the final move in the organisation was a natural progression into being responsible for the implementation of all mainframe systems throughout the plant to ensure that Ryton was at the same level of computerisation as the rest of the plants around the world.

In April 2006 however, PSA Peugeot Citrôen decided to pull out of the UK in favour of a new facility in Trnava, Slovakia. Given that Andrew was working on system implementation for 2008 and beyond, his role stopped there and then and was instead made responsible for the website and intranet system helping all employees find new careers after PSA. It wasn’t until November 2006 however, that Andrew finally left PSA in order to start a new life as proprietor of The Galley of Lorne Inn the following month.

The road to this new start in life was not a spur of the moment decision. Having introduced his then partner to the delights of Scotland in 2000, the love affair with this great country began. Having stayed in a Guest House in the Highlands the romanticism of a life beyond PSA and a lifestyle to which he felt he could become accustomed started to take shape. In fact in 2003 when Andrew married on the Isle of Skye in Flora MacDonald’s Garden at The Flodigarry Hotel in May of that year, and having taken this opportunity to showcase this wonderful country to 60 family and friends at his wedding whom almost all had never witnessed Scotland in the flesh, did the ambition to one day own his own establishment in Scotland really begin to take shape.

After a few failed attempts to acquire a Guest House due to house moves falling through back home in Coventry between 2004 and 2006, the impending departure of PSA from the UK announced in April 2006 suddenly made everything black and white. After careful soul searching, after all by then he had a 1 year old son and a daughter on the way, the decision was finally made. Rather than fight over a handful of jobs in Coventry with over 3,000 ex PSA employees, it was time to make the break. It was really a case of now or never and so the search began.

The search took him all over Scotland, but the west coast was where the heart was at. Finally in May 2006 after a chance phone call, he stumbled upon the Galley of Lorne Inn. After a long and sometimes frustrating process to acquire the establishment, finally he arrived 10 days before Christmas with a then 2 year old son and 7 week old daughter, no previous experience of the hospitality trade and a stark question of what have I done? The only problem was that the romanticism of moving into the hospitality industry was that it was based on owning a Guest House with 5 or 6 bedrooms. Whilst he achieved the 6 bedrooms, a 60 seat restaurant, kitchen and two bars was not part of the original plan and of course is a completely different and far more stressful animal!

Hindsight is a great thing and given the legal difficulties with the previous owner, and the loss of the entire hotel roof in the storms of January 2008, Andrew would say that perhaps he shouldn’t have touched this place with a bargepole, but that is all history and he is now glad to say that The Galley of Lorne Inn is right on the map these days after a lot of hard work turning this establishment into a very special place. Perhaps it’s not for him to say, but if you had seen the place in 2006 you would understand his thinking.

On a personal level Andrew is a sports mad person, but only achieved any level of sporting ability in tennis, having been a member of Coventry & North Warwickshire tennis club, playing in the Warwickshire leagues and active committee member for most of his 22 years there. The move to Ardfern, meant his tennis days were over. Andrew’s other love was following his beloved Sky Blues (Coventry City Football Club), having first watched them at the tender age of 5 and was a regular when parents allowed throughout the 70’s until becoming a regular from the mid 80’s under his own steam. He bought his first season ticket in 1987, to ensure that if Coventry City reached the FA Cup final of that year, he would be guaranteed a Cup Final ticket. That money certainly wasn’t wasted and apart from the subsequent birth his two children, it was without doubt the 16th May 1987 which is regarded by a phenomenal way as the best day of his life, when Coventry beat Tottenham Hotspur in the FA Cup Final. Having also followed the Sky Blues all over the place with friends / work colleagues for both league and cup matches in the 90’s, Andrew has been to most grounds in England. Andrew remained a season ticket holder until 2006 and still follows avidly the fortunes of his beloved club, although (in his own words) these days, the less said about CCFC, the better!

His other loves (to get away from it all) are sitcoms, comedy films and Coronation Street. Also purely as an amateur, is that of his love of photography, Andrew’s only real release from the day to day pressures of owning such a business. Whilst he cannot afford the time he would like to devote to this passion, you will see some of his work in the menus, in the hotel’s bedrooms, on The Galley Facebook page and of course on this website.